You're Welcome To Pass It On.

Tennessee Football Coach fired for making Obama song. He'll make more money when this song becomes a big hit than he would teaching school.
Tennessee middle school assistant football coach, age 26, fired for a song he wrote  and played!
This could be the next number one hit country song. It's the best effort yet at encapsulating the outrage  at the oversteps of this government in an entertaining song.
Apparently, the guy was fired over the song because some parents complained. If you like it, help it go "viral" by passing it along to everyone you know.
Click for a Great Song!!!
http://video.staged.com/dtglobal59/tennessee_football_coach_fired_for_making_obama_so

But we are instructed to pray for those in power/authority, so I figger this works for hoping and changing that we have an ex-prez come November.

Posted by amanofwonder at 4:39 PM 4 comments:

Time Mag Over the Top?

Mind ya I ain't no prude iffen the truth be known.  But this bag and this mag, when they showed this picture of a woman (not a lady in my opinion) drop her top, really went over the top according my way of thinking. Just not appropriate period, and is way worse than that gal that was painting her son's toenails pink for sum advertising deal!

What struck me the most was the defiant body language expressed by this gal and the "is this Ok look" on the young boy's face.  I really do not think our society has lost all of it's sense of modesty and decorum, but the liberal sucking the hind teat approach of getting their agenda front and off to the left makes me scratch my head in bewilderment at times. 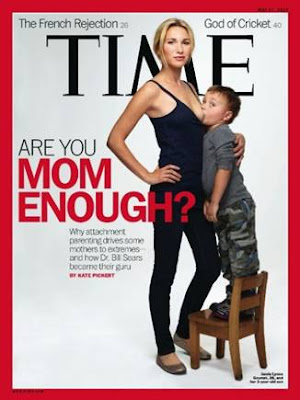 Maybe it's all a function of the mentality of the left thinking that folks are incapable of taking care of themselves and making up their minds according to the individually that G-d created us with.  Worked pretty dang good for me growing up.  I was bottle fed, Mom did the stay at home thing, I was granted a lot of latitude in decision making for myself as I aged (can't say I growed up, gotta Peter Pan streak in me about a mile wide) and nanny was a foreign concept (did jah know way back when alotta European gals would come over here for college and worked as nannies to pay tuition?).

Sad to see where this country is headed, even men are getting breast cancer (betcha it only plagues liberal men, they tend to be big boobs anyway).  The icons of society seem to be the Hollywood goofballs, socialistic appointees, news anchors that figger the only news important to report on is their opinions and a president who figgers if he sucks up to the right leftist people he can break records for a single event fund raising. 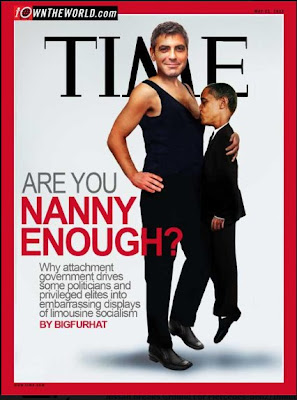 If this what it takes to be one of the priviledged elite I'd take option B, suck on the barrel of a Smith and Wesson 45 cal and pray my aim is true.


Not really just kiddin' ya'll, life would never suck that bad to not go out fighting the good fight, just sounded like a good finish to my short dissertation on why liberals suck.
Posted by amanofwonder at 6:01 PM 5 comments:

The Botox Babe is back in the news.

Everytime I hear about this gal I can envision the agony of waterboarding.  She's all wet, a suffocating liar and torturous to even look at.

Us folks up in Oregon have been over run with Californians for many years now and I sorta think maybe it's that they wanna get away from hypocrites like Pelosi.  One problem tho, they bring their liberal nature with 'em and the state at the end of the "trail" is fast becoming a little Californication.

Even the east side of the Cascades is quickly cascading into a fetid pool of liberal back eddies filled with the sucker fish that swam upstream only to spawn again the failures they are trying to escape from.  Ta heck with a fence between Mexico and the US, Oregon needs an electrified one for sure.

Oh well, at least I got me my tongue in cheek country music,

Because this Saturday is the 5th of May I think it is appropriate to clear this up.

Most people don’t know that back in 1912, Hellmann’s mayonnaise was manufactured in England.

In fact, the Titanic was carrying 12,000 jars of the condiment scheduled for delivery in Vera Cruz, Mexico, which was to be the next port of call for the great ship after its stop in New York.

This would have been the largest single shipment of mayonnaise ever delivered to Mexico. But as we know, the great ship did not make it to New York. The ship hit an iceberg and sank, and the cargo was forever lost.

The people of Mexico, who were crazy about mayonnaise, and were eagerly awaiting its delivery, were disconsolate at the loss. Their anguish was so great, that they declared a National Day of Mourning, which they still observe to this day.


The National Day of Mourning occurs each year on May 5th and is known, of course, as “Sinko de Mayo.”~
Posted by amanofwonder at 7:14 PM 4 comments: 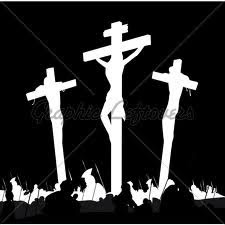 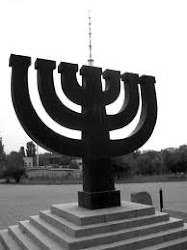 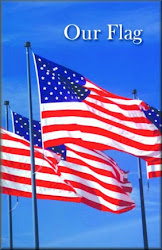 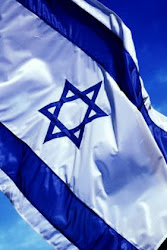